Posted by Chris Niblock in life/humour on October 24, 2011 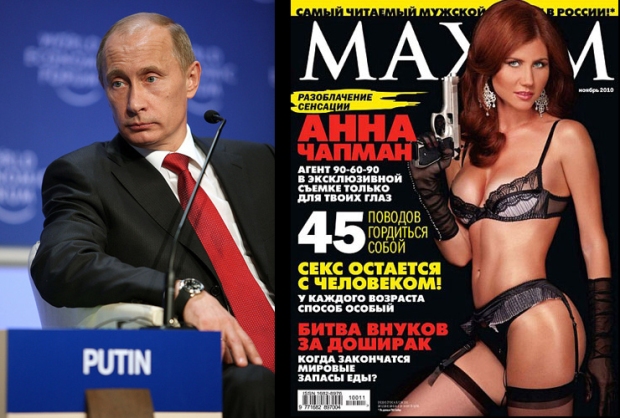 In the year since she was deported from America in the biggest spy swap since the end of the Cold War, Anna Vasil’yevna Kushchyenko: aka Anna Chapman, has gone from undercover spy to pin-up cover girl. On her return to Russia, she was toasted by Putin at a private gathering and invited to join a pro-Putin youth group; her job to provide leadership advice to Russian youth. So far, so good, but then she posed half-naked for a men’s magazine holding a gun. Somewhat surprisingly, this embarrassed the former KGB agent Mr. Putin who has not only posed topless with a gun, but with horses and  a fishing rod.

Then in an incident more reminiscent of a Carry On film than John Le Carre, the Bondski girl took to the catwalk during a fashion show brandishing a pistol, which, much to the delight of her detractors, she proceeded to drop in front of the attendant press corps. Now ‘the spy who came in from the cold’ could find herself back out in it. Given the scanty clothing she’s been wearing lately and with the harsh Moscow winter just around the corner, things could prove very cold indeed for the failed spy.

I don’t know if British Intelligence has someone like Anna working undercover in Moscow but I’m betting her choice of underwear will be far more sensible than Chapman’s: a nice warm thermal vest from M & S and some thick woolly tights. Let’s hope that like the Americans, would be Russian traitors will just love her English accent!