Posted by Chris Niblock in life/humour on January 31, 2012

The group behind proposals to build a replacement for the royal yacht Britannia  have been unveiling some of the ideas under consideration; these include a design based on a roman galley. In roman times these largely muscle-powered ships were manned by slave labour, but a group of tory back-bench MP’s are said to be very interested in a scheme which would see crews being drawn from amongst the unemployed, and in particular those receiving job seekers allowance.

‘It would give the unemployed a chance to serve their country and at the same time earn some of  their benefit. It would also be good for the environment, so it’s a win/win situation for everybody,’ the spokesperson gleefully declared.

It’s envisaged that each of the unemployed workers would be expected to spend at least one week a year rowing members of the royal family and visiting dignitaries up and down the Thames.

The unions have condemned the proposed scheme outright but when asked to comment, a labour spokesperson said, ‘We haven’t ruled anything in and we haven’t ruled anything out at this stage’. When it was pointed out that this sounded very like a rowing analogy, the spokesperson admitted that he had rowed for his college whilst at university but was somewhat rusty with an oar these days.

Anyone eager to be shackled to the royal rowlocks should e-mail their cv to:

Oarspersons will be required to sing work songs including:

Pictured: Charlton Heston in a scene from the movie epic, Ben – Hur (Metro-Goldwyn-Mayer 1959) 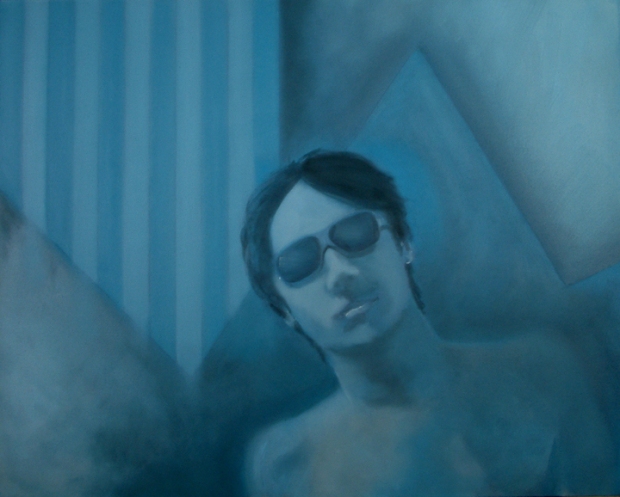 My original intention when I started this painting was to produce an abstract piece. After working on it for a while however, I decided that the idea wasn’t going anywhere. The vertical blue and whites stripes were suggestive of the ultra violet emitting flourescent tubes used in sunbeds, so I added the figure of a guy wearing sunglasses. I had employed a colour palette from the cooler end of the spectrum and this provided me with a title for the work.

Cool Shades is currently on show along with Cosmic Collision (previously  featured on this blog) until 3rd February at the Ludlow Assembly Rooms gallery, Mill Street, Ludlow SY8 1AZ. Both Paintings are for sale. Cool Shades is priced at £250 and Cosmic Collision at £350. The artworks are painted in oils on good quality, deep profile canvas 60 x 76 cms in size.