A Suitable Case for Holmes?

Posted by Chris Niblock in true crime and fiction on June 12, 2012 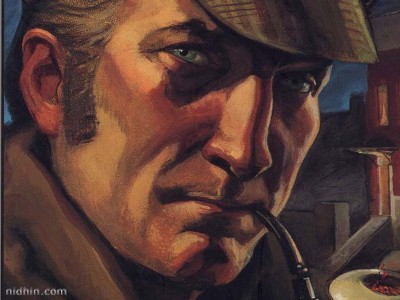 Recently I’ve been reading Philip Sugden’s comprehensive history of the Jack The Ripper Murders. Aside from the enduring mystery as to the identity of Britain’s most famous serial killer, the book’s pages contain some fascinating social history.

The picture, so often presented of ‘Jack’ stalking his victims through the deserted streets of London’s Whitechapel couldn’t be further from the truth. In the 1880’s the area’s tenements and ‘doss’ houses were crammed full of the  transient working classes and of course prostitute,s who were up and about at all hours of the day and night. It was quite common for these workers  to be setting out for, or even starting work at one, two, three or four in the morning! The Ripper frequently risked discovery and may even have been disturbed at his grisly work on several occasions.

For instance, Elizabeth Stride was killed in Dutfield’s yard just a few feet away from The International Working Men’s Club, some of whose members were still singing and drinking at the time of the murder. Her throat had been cut but, she hadn’t suffered the mutilation visited on many of the other victims. Several of the club’s members had stepped out into the yard close to the estimated time of the murder, so it’s quite possible that The Ripper was disturbed before he could do anything more.

One passage in the book leapt out at me more than any other. This was a statement made by Major Henry Smith, Acting Commissioner, who describes being roused from his bed at Cloak Lane Police Station, and jumping into a Hansom Cab on the night of the Catherine Eddowes murder. Licensed to carry two, the Commissioner was joined inside by a 15 stone Superintendent, whilst three detectives jumped on the back.

The passage was so redolent of Conan Doyle’s A Study in Scarlet where Sherlock Holmes hops on the back of a Hansom, in order to follow the ‘old crone’ who claims the ring, thought to have been dropped by the murderer of Enoch J. Drebber. ‘That’s an art which every detective should be an expert at,’ he informs Dr. Watson when retelling the story. A Study in Scarlet was first published in 1886, just two years before the Ripper murders began. This connection with Sherlock Holmes set me wondering – if a real-life Sherlock Holmes had been around in the 1880’s would we still be wondering who Jack The Ripper was?

Holmes for all his skills would have had little to go on for the victims appear to have been chosen at random. The Ripper left nothing at the scene of his crimes that could be used to identify him and, there was little or no forensic science available. Crucially the five murders were committed over a relatively short period; the first in April, the last in November 1888. Most serial killers are caught because they go on killing  and, becoming careless, make a mistake which eventually leads to their capture.

Some mysteries should perhaps remain a mystery; few of us would still be interested in the Whitechapel murders of 1888, if Jack The Ripper had been caught and the mythology surrounding him had been stripped away by his unmasking.